Our indentured ancestry brought with it a vibrant heritage that always elevated the arts.

In a school week, my son had to complete a challenge that his primary school calls SQUIRT week (Shh Quiet, Its Reading Time). It meant that he had no access to cellphones, ipads and the television. Indeed it was a very challenging week for the whole family as we all decided to forgo what has become a ubiquitous part of life. In that week, we played backyard cricket until the sun had set, played chess, cooked our meals together, read beautiful books and went through family albums, recalling life’s simple treasures. We also had to find ways to entertain ourselves and on one evening found ourselves at the UKZN’s Sneddon Theatre watching Anitha Rathnam’s, “ A Million Sitas”. The performance seen live and delivered in English was far more captivating than any television production would have delivered. The sad reality of the performance was that there were so little people in the audience to witness a beautiful art form that has always been a rich part of our heritage.

Our indentured ancestry brought with it a vibrant heritage that always elevated the arts. The very same production we had witnessed at the Sneddon theatre was no different to the theatrical productions from indentured times through to the late 1980s. Yes the technological nuances were much improved but the subject matter, purity and bhava (emotion) of performance was no different.

‘Free’ Indians post indenture found time to explore different creative expressions as a cathartic process from an oppressive plantation life. The late Professor Fatima Meer’s seminal study on Indians in South Africa called ‘Portrait of Indian South Africans’ foregrounds creative expression as a critical part of South African Indian life. She wrote,“ They began as the improvised expressions of the poor indentured workers….” The first lot of free Indians had among them a few musicians, storytellers and dancers who improvised in creating entertainment. “Their meager talents and instruments provided for the little Indian communities, settled in rural and virgin environs of the city, the basis of all their entertainment,”. The narrative for these performances came from dramatized stories from the Mahabharata, Ramanayana and Puranas in Hindustani and Tamil. The Muslims among them sang Qawwalis in praise of god. It’s praiseworthy to note how people in those days had supported each other notwithstanding their religious differences. It’s certainly a lesson in unity for us today given how far apart we have grown in a diversified community!

As the years rolled by, performances became much more organized that saw artists performing at grand temple ceremonies and weddings. So slick were the musical arrangements that by the 1930s fully-fledged professional orchestras became a way of life. Naresh Denny Veeran’s PhD on “ Orchestral music of the working class” offers a phenomenal insight into the mechanics of a musical identity. Veeran brings to light the doyens of a rich orchestral tradition that saw the likes of the Railway Youth Orchestra, the Golden Lily Orchestra and the famed Ranjeni Orchestra entertain masses in ways they had never seen before. No wedding in the 1950s to 1980s was complete without an orchestral ensemble. Sadly these orchestras do not exist today and maybe a tradition that ought to be revived in giving today’s youth lessons in old school values of collective camaraderie.

Before the orchestral tradition there existed, three other types of semi-professional forms of artistic expression. Therukoothu, a South Indian dance drama group performance that dramatized religious scripture; Sarangi Tal, the North Indian groups that rendered religious song and dance in the lost language of Bhojpuri and the third expression found in Qawwalis by Muslim performers that was rendered through energetic expression lasting an entire night. In most instances the performers made the props and costumes with the ‘natchanias’(males impersonating females) of the Sarangi Tal dressed with ornate costumes that embellished many a performance. Therukoothu dancers created highly creative costumes made of papier-mâché to dramatize their performances. It is interesting to note that women in those years were ‘barred’ from performing in such professions.

The town of Mt Edgecombe was the citadel of Therukoothu as expertly outlined in Sathasivan’s (Satchu) Annamlai’s MA dissertation on the art. Therukoothu flourished at a time when devotees from other plantations were provided a ‘special train service’ just so they could all take in the festival activities. As there were no alternative forms of entertainment, Therukoothu occupied center stage for the Mt Edgecombe community where performers were given celebrity status. Therukoothu did not require elaborate stage settings or a venue; performances were done on the open air, some without a platform with cloth sheeting held by performers that sufficed as a stage curtains. Beautiful oil torches enhanced the atmospheric mood of the engaging story lines in a similar way to the modern day lighting techniques of Anitha Rathnam’s, “ A Million Sitas” 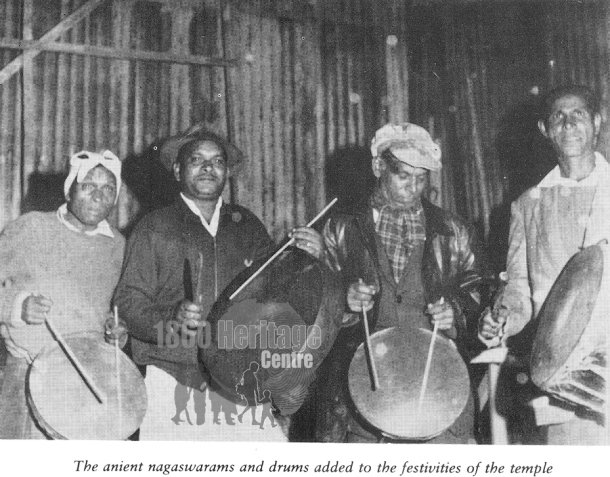 Satchu Annamalai shown above in his performance for The Battle of Mayal Ravanan, a Therukoothu performance done in the 1980s. The drummers shown on the right were from the town of Mt Edgecombe.

Village life of our ancestry eroded over time, eventually giving way to urbanization that sadly contributed to the demise of our rich heritage of Sarangi tal, Qawwali and Therukoothu. The art of Therukoothu survived up to the late 1980s but did so because of the camaraderie of the townsfolk of Mt Edgecombe. There were indeed other factors that led to the demise of our traditional folk entertainment. The growing importance of English as the spoken language of communication meant that the new generation audience could not comprehend the dialogue found in our traditional masterpieces. Additionally the fast paced rhythms of the music found in the movies of the growing brand of Bollywood and Kollywood were no match to the slower, meaningful music and dramatic productions of our past.

Perhaps the most devastating death knell to our heritage came in the form of television. Television introduced shows like Dallas (a popular television series) resulting in fewer people attending cultural and religious activities. On March 21 of 1980, JR Ewing, the arch villain of Dallas, was shot in an episode called a “House Divided”. This was the last show in that series with everyone left with the question of “Who shot JR?” The sad part of this gripping television history was this episode was aired on the 16 day memorial service of my Thatha (grandfather) the legendary Arumugam ’tabla’ Govindsamy. ‘Tabla Gwain’ as many called him was a legendary tabla player of his generation. He played Classical Carnatic music with the likes of Mr. V Soobiah Pillay, Mr. Harry Arunachallam, Mr. I Kistraj Ragavan, Mr. Gopalan Govender and many more stalwarts who have been the torchbearers of the great legacy that we proudly enjoy today. So popular and talented was Thabla Govindsamy that he played long into the night for many a Qawwali despite his orthodox Tamil lineage. The saddest part of that night of my thatha’s memorial was that many people were more concerned with who shot JR rather than paying homage to one of South Africa’s greatest tabla players.

Esoterically, television’s popularity destroyed the social fabric that came with our traditional folk heritage. Television and other social media platforms point toward invasive dependencies that deny the arts on so many levels. The joy of SQUIRT week reminds me of the work that remains ahead in supporting the arts more intensely and hopefully reviving our traditional folk heritage so that my “house is not divided!”

Curator of the 1860 HERITAGE CENTRE